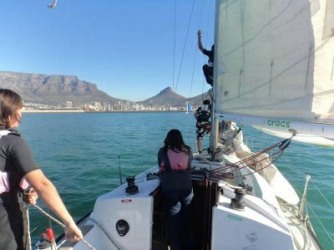 We have moved on to the off season and sailing has slowed down considerably. However a few of our youth sailors got the chance to sail in the Pick and Pay Keelboat Nationals in Table Bay right under the mountain.

Andre Bredenkamp, Anke van Rooyen, Daleen Naude, Joppie Naude, Tammy Holden, Tony VD Westhuizen, Sanmarie Fourie had the chance to sail a Muira loaned to them for the event. The group arrived late on Friday night and were accommodated on one of the big keelboat at Royal Cape Yacht Club’s Marina.

The next few days was a big learning curve with them having to become a team, learning to sail a new boat and to adjust to the different weather conditions in the Mother City. However they did extremely well and finished 8th overall against the best of Cape Town.

Then off course we have the honour of three of our youth sailors going abroad to sail World Championships.

Megan Robertson has qualified for the Tera team going to England to sail the world championship.

Keegan Nortjie and Daleen Naude are going over to France to sail in the Topper World Championship.

Well done and we wish you fair winds and safe travels.