Sailing has quietend down a lot in the past month due to the onset of winter and either too much or too little wind. The school exams also had a big influence on Sailing activity. We only had one day’s sailing in the entire month. This was on the Sunday 22nd of June. We had a near perfect wind and 3 races were sailed. Chris Naude and crew Meghann Naude managed a spectacular capsize and after righting and repairing the boat Chris managed to sail only the 3rd  race. Team Naude missed the first 2 races due to their capsize. Good fun was had by all. This was the last official club league event. Results are attached to this email.

Our sailing AGM is planned for Friday the 25th of July and all sailing members are requested to attend. This will be combined with our sailing prize giving and a delicious warm meal will be served to all attendees afterwards.

Our sailing school has also suspended all official trainingfor the upcoming school holidays.The young sailors will however be sailing socially under supervision of the coaches during the holidays. Details will be announced later. On Thursdays The sailing school have 12 previously disadvantaged developement sailors attending the sail training. This is very encouraging. 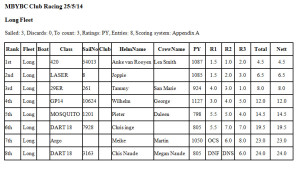 The sailing season will start again just after the MBYBC AGM at the and of August.